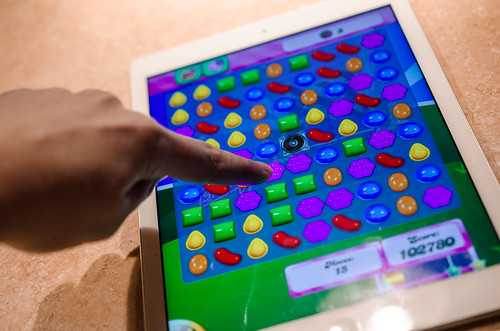 This blog post documents my experience with the digital game Ingress. Ingress is a multiplayer location-based mobile game (LBMG) that utilises the features of mobile devices such as GPS and location data and adds augmented reality (Hulsey & Reeves, 2014). These technical features are combined with a detailed narrative supported by websites, videos and social media. The Ingress app requires the player to get outside and explore the real world using their mobile device to discover “portals” located at significant landmarks. The following beginners guide video explains Ingress in more detail.

Here is a timeline of my first encounter with Ingress. I was quite pleased that I figured out the basic features of the app and looked forward to having more time to explore the game over the Easter break as Resistance Agent kleem9.

My second attempt took a more targeted approach and I was so immersed that I lost track of time. I was thrilled when I levelled up and captured portals but disappointed that my attacks on enemy portals were unsuccessful. How could I improve?

I decided to utilise the community aspect of Ingress and joined the Resistance Melbourne Community. I participated in a new agent chat and found out that I was on the right track by hacking as many portals as I could and by capturing neutral portals. I also found out that I probably would not be successful in attacking enemy portals until I was level 6. I did a walk along the Yarra River at Heide and Fairfield with my sister (who was not interested in the game at all despite my attempts) to get more resources and access points.

I am already intrinsically motivated to exercise so I incorporated my play into my usual daily exercise routine and was was playing alone. I intended to keep playing the game for a few more days but I got sick and did not have the energy. Playing Ingress is time consuming and other interests compete especially when you are working full time and studying part time. The gaming experience was initially compelling but my interest waned as it became a bit repetitive.

Positive aspects of Ingress for me

Negative aspects of Ingress for me

While playing Ingress it is clear that it could have educational applications in almost every subject area. Without much thought the following came to mind:

A secondary school teacher at Eltham College in Melbourne has documented his experience in a blog post Ingress and education: The experiment

I don’t know much about augmented reality, the technology that augments the physical world with information, audio, vision or GPS data from virtual sources (“Augmented reality”, 2017). I have heard the term and read a few articles about it in the news but only have a basic understanding of it. Last year I watched on but didn’t get involved with Pokemon Go. I chuckled as I walked past people glued to their phones and wondered what all the fuss was about.

Last week I downloaded Ingress to my phone, put my headphones on and took a five kilometre walk around my neighbourhood figuring out how to hack portals and deploy resonators. To my utter surprise I really enjoyed the experience. I discovered places close to home that I didn’t know existed with the aid of the Ingress app that uses geo-location technologies of GPS, Google Maps and Google Streetview to guide you to portals within the game’s science fiction narrative. Stay tuned for more about my experiences with Ingress in a later blog post.

Now I can see the appeal of games that use augmented reality. Augmented reality can show you things that you are unaware of. I was excited by the application of augmented reality outlined by Jay David Bolter  (Art Line, 2013, June 3) where the physical and virtual world combine. Museums, galleries and sites of historical or cultural heritage can be enhanced using your own personal device using augmented reality technology. The video below shows one such example.

It is difficult to predict what the future will hold for augmented reality and virtual reality but it looks exciting for games and education, as long as we are willing to accept change. This idea is explored in the following Ted Talk, Will virtual and augmented reality move us into the knowledge age?