Last week I perused the most recent NMC/CoSN Horizon Report: 2016 K-12 Edition and identified the trends and developments in educational technology I think are related to game based learning.

As you can see from the image below, a significant number of trends and developments in technology could involve game based learning. Of particular interest to me as a teacher librarian are Makerspaces. Makerspaces are found in school and public libraries and can support game based learning, STEM and 21st century skills. With this in mind I intend exploring games throughout this subject that could be included in a library Makerspace.

Another area I am interested in exploring is storytelling and games. Writing is a focus at my school this year so this news report How a nonprofit is using video games to strengthen students’ writing skills caught my attention. I feel that this report has clarified the direction I should be heading as a teacher librarian in relation to game based learning.

The first few readings of module 1 introduced me to a new language, the language of video games. The language of video games is new to me and there are so many acronyms; ARG, MMO, MMORGP, LARP, COTS, DLG, DGBL, GBL etc. I had to consult Wikipedia on more than one occasion to understand the readings. Video Games have their own literacy and we bring our own experience to them (Gee, 2012, March 21). My experience is limited so I have a steep learning curve ahead of me to understand the ludology (discipline that studies games) and the shared cultural background that people who play games have (Montola, 2012). I think an old fashioned glossary that I can continually add to, created with a newer technology, Google Docs might be helpful during INF541.

Are digital games being overlooked in ‘digital education’ reform?

My personal video game history is rather historical. It centres around the early video games of the 1980s; Pong, Space Invaders, Frogger, Pacman and Donkey Kong. As video games developed in the late 1980s I was more interested in music and impending adulthood and lost interest in video games. 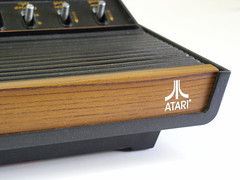 As a teacher librarian I have watched students play games in the library for entertainment and learning but have not been involved in curricular decisions or been motivated to learn more about game based learning. I was first made aware of game based learning in the 1990s when secondary students were involved in playing the Sharemarket Game . Students were so engaged and rushed into the library to check whether they had made “money” or lost it. The Sharemarket Game demonstrated to me that games with an educational intent could also be highly motivating (Jennings, 2014).

I admire proponents of game based learning such as Rebecca Martin (Jennings, 2014) who are willing to integrate games into learning however I feel unqualified to do so. I am not a gamer and admit that up until now I have had little interest in becoming one because I have so many other interests. I am not part of the culture of games (Jennings, 2014) and I don’t speak the language so I feel inadequate. I am out of my comfort zone.

I am certainly not anti-games but like Dr Beavis I have some concerns about their affect on learning (Jennings, 2014). I see the potential games have for practicing 21st century skills of critical thinking, communication, collaboration and creativity (Extra Credits, 2014) but believe more research is required. In recent years public libraries have embraced video games and makerspaces to appeal to the community and makerspaces are becoming more common in school libraries too. Professionally I need to up-skill so that I can make informed decisions.

The popular media and my own professional reading around digital education is dominated by the word coding. Coding is considered a future work skill by governments and a way of moving students from being consumers of technology to creators (Turnbull, 2014). The focus on technology and STEM may give more legitimacy to digital games for learning and result in more research.