Social networking involves people sharing their interests, ideas and opinions in a common space. Before the internet, this common space may have been at a dinner party, a work function or a club, but today it happens online. Over the last decade these online social networking spaces have evolved to cater for different environments, age groups, professions and interests. People are able to connect with their family, friends and colleagues over vast distances at very little cost.
Facebook
My introduction to social networking technologies was Facebook in 2007. I joined because my friends invited me. I have just looked back at my early posts and I mostly shared photos of celebrations and holidays. My use of Facebook increased when I got an iPhone and an iPad. I belong to special interest groups for the sports and hobbies I enjoy, use it to plan social events, share interesting articles, videos and images. While I follow some professional bodies on Facebook, mostly it is a personal place and a way to stay in touch with my friends and family. As a teacher librarian I am very aware of my professional role and I have strict privacy settings.
Flickr
My interest in photography meant that I was drawn to Flickr in 2008. I fell out of love with it for a while but have returned to using it. The pictures I post and the groups I belong to on Flickr are of a personal nature. I do use Flickr for work and study to source creative commons images.
Twitter
At first I was sceptical of Twitter so I didn’t start using it until 2012. Encouraged by people in my personal learning network, I decided to lurk for a little while by following people in the library field. It wasn’t long before I got the courage to post some tweets and take part in a Twitter chat. I have found Twitter to be a great source of professional learning. More recently I started to follow many of my personal interests on Twitter and this year I will be using it for study purposes. Towards the end of 2014 I started a Twitter account for my school library.
Others
I also dabble in Instagram, Diigo, Pinterest and Goodreads.
By completing INF506, I expect to learn how social networking can be implemented in a library setting. As a teacher librarian I hope to explore the impact social networking has on young people and how school libraries can best utilise it. While I am comfortable using many social network tools for personal use, I would like to learn more about the policy decisions that need to be considered in a library setting. 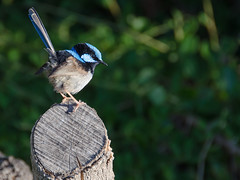 This is one of my photographs that reminded me of the Twiitter logo.