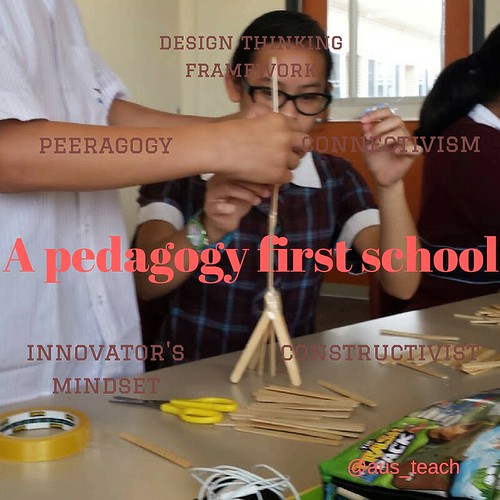 My response to Chapter 2: The innovator’s mindset: Empowering learning, unleash talent, and lead a culture of creativity (Couros, 2015).

What keeps resonating with me is the idea that innovation is not about the stuff; it is a way of thinking (Couros, 2015). This is probably not surprising as my Master of Education journey is all about a deep exploration of knowledge networks and digital innovation with a focus on pedagogy, not edtech per se, which might be surprising to some edtech evangelists. 🙂

In Chapter 2, of The Innovators Mindset, Couros takes this idea one step further by describing the innovator’s mindset as the “belief that the abilities, intelligence, and talents are developed so that they can lead to the creation of new and better ideas” (Couros, 2015 Chapter 2, para 5). My reaction to this thinking is to interpret it as a call to action for educators to create something new with the knowledge that they have – to move beyond (as described by Couros) – an education that is provided for us towards something we create ourselves. Educators worldwide are taking hold of this style of learning as they participate in their own, self-created PD (blogs, social meets, wikis, twitter). Why can’t we show our students how to learn like this… which of course we can?

This outlook also takes me back to the writing of Gee (2005) where he argues that the theories of learning prominent in many of our schools bow to a content fetish and we need to look for new ways of doing. I have quoted elsewhere in my blog Gee’s words: know is a verb before it is a noun, knowledge. This is a stark and intelligent reminder that as we professionally learn by doing, we need to also design schools that acknowledge this learning by doing. We already know this.

One (there are many) important take home message fom Chapter 2 of The Innovators Mindset – within the contexts of my own professional explorations and experience – is to answer this call by designing and prototyping a very student-centred, constructivist pedagogy that recognises information is abundant and empowers students to create; with knowledge that is now at their fingertips. I see very clearly a way forward that sees educators developing and honing a pedagogy that is guided by frameworks such as those offered by design thinking, peeragogy, connectivism and an innovator’s mindset to drive innovation. This is a mindset that for educators demands that pedagogy comes first. After the development of this pedagogical framework comes integration of other technologies to support that pedagogy; otherwise it is my view that the technology, perhaps as a disciplinary technology, then controls the pedagogy and unintentionally leads to a strengthening of a content fetish.

With this in mind let me try to answer the Questions for Discussion given in Chapter 2: The Innovator’s Mindset.

What are some examples of innovation that you have seen within constraints, both inside and outside of schools?

The Astrophotography Awards as per my previous post. The museum organisation that I worked for offered many constraints (time, space, goals, cultural) but this learning activity saw its genesis after a serendipitous meeting at a teachmeet organised via social networks. This is a great example of informal networks promoting the flow of information and innovation (Kudashin, 2012).
Inside schools I see lots of innovation e.g. teachers experimenting with different ways of doing, such as flipped classrooms. I do not think flipped lessons are where schools should be headed but the method is an example of teachers learning by doing. It is an example of new ideas flowing into formal systems via informal networks that some teachers are becoming adept at building.

What questions do you think are vital to understanding those who we serve in education?

This is a damn hard question and depends on context. Four questions that I think are vital to build empathy and understand those we serve are:

What questions do you think are vital to ask students so as to build empathy?

If you were to start a school from scratch, what would it look like?

As shown in the image at the start of this blog post, the school that I would build from scratch would be what I call a “Pedagogy First” school. What does it look like? By way of an analogy, begin by picturing a traditional street intersection in a major western city such as Melbourne that is tightly controlled by visible technologies of control such as traffic lights, lane markings and road signs. Then view the embedded YouTube clip below. This video depicts, in an abstract way, my school.

Have you ever walked across a road in Hanoi or Ho Chi Minh city? For a westerner who is used to tight constraints and a need for order, this is a very scary experience but once you find trust in the system and embed yourself into it…flow happens. 🙂 This system, which is culturally alien to some of us, presents undeniable risks but it flows beautifully.

The “Pedagogy First” school that I envisage has less obvious constraints (technologies of control) but flow happens more readily than in a traditional school; flow of learning, ideas and innovation. This school assumes that all students want to learn. As hinted above my school is founded on a design thinking framework, peeragogy and connectivism.

How do we take what we currently have to create a better education system for our entire community?

Thank you for reading, please gift me with your comments.