The development from static html website pages to Content Management Systems (CMS) such as this WordPress (Web 2.0 tool) blog has enabled website users to publish information to the internet via a user friendly interface like a word document instead of having to code the page line by (hypertext) line. CMSs allow users to be producers of collaborative systems as distinct from Web 1.0 users who were often only able to consume the work of the publisher because they did not have enough technical knowledge to code in html. 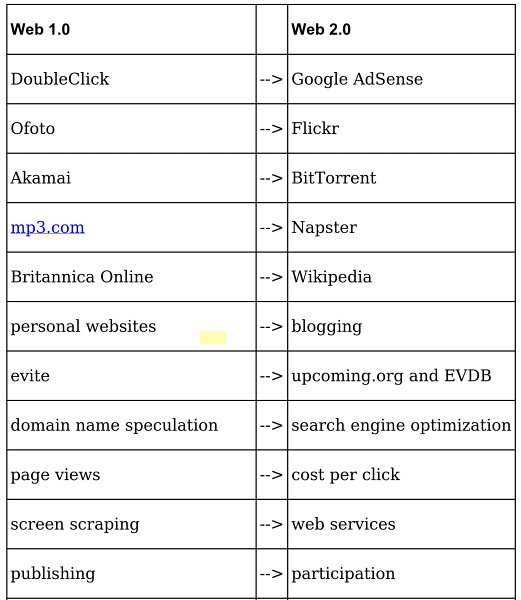 The interfaces for users to add materials to CMSs are varied and include simple forum pages like ubuntuforums.org to multi media collaborative websites such as facebook.com. People can work on the same project together, discuss their shared interests, upload and view each others photos, videos and portfolios using Web 2.0 applications (Ishizuka, 2010). Tim Berners- Lee, the inventor of the modern internet (Swartz, 2013), has also coined the term Web 3.0 to describe the next stage of web design that increases the individualisation of personalised searches more efficiently by using semantics (Berners-Lee and Fischetti, 2000). Advocates of the semantic Web 3.0 such as Aaron Swartz have worked with Tim Berners- Lee on the development of a framework that facilitates the searching of website data by other web servers (Swartz, 2013) and free up the internet’s data for everyone. Swartz (2002) argued convincingly that savvy Web 2.0 applications need to retain users trust by utilising Web 3.0 frameworks with semantics to make their information available to them as Wikipedia had done with their whole database as an XML file. Educational Web 2.0 applications that support these semantics such as MOODLE and Mahara have developed frameworks that are viable for users to collaborate on across institutions because they are able to import and export their own CMS/ LMS data.

Swartz’ ideas are important in the Web 2.0 corporate environment where users’ data can be deleted permanently without the ability to save and reuse it as shown with the demise of Google reader. In education environments the use of Web 2.0 tools needs to be considered carefully from this technical point of view because if information professionals are to develop relationships with the community there needs to be a transparency for users who contribute. Designers and maintainers of Library 2.0 websites for example need to be aware of the need for proper tools that allow Open Access to information so there are clear and coherent policies in relation to data use. The Australian Federal Government (AFG, n.d.) have developed a range of policies about Web 2.0 use and planning strategies to assist in the development of sustainable approaches for these new collaborative mediums. Hopefully with some proper planning and strategic vision the problems experienced by the National Library of New Zealand (NLNZ, 2009) when developing their use of Web 2.0 tools can be avoided.

The growth in popularity of social networking websites such as Facebook, Twitter and Google+ also offer potential areas for Web 2.0 environments because they allow users to present a ‘mash up’ of their experiences by linking to a range of social media and related Web 2.0 websites. Web 2.0 tools such as Mozilla popcorn allow users to collaborate in engaging ways and include a range of dynamic information made available through open knowledge principles. Information professionals should seek to develop the use of these new Web 2.0 tools in a sustainable way so that the reality of an open Web 3.0 can be realised.